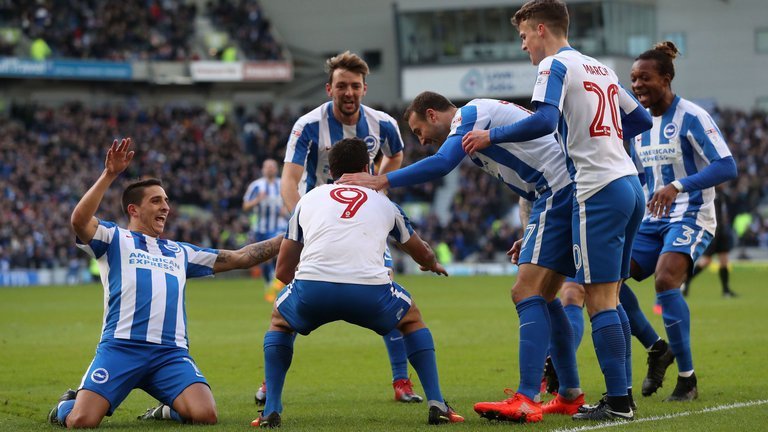 Brighton have finally managed to topple the Newcastle United monopoly of the Championship and currently sit top of the league, two points clear of the Toon Army. This has all been a result of the fantastic run that Chris Hughton’s side have been on recently with The Seagulls winning their last four matches, whilst they have still lost just the two games all season.

Chris Hughton performed a masterstroke in the summer when he brought in former Brighton player and Championship poacher Glenn Murray on loan from Bournemouth. The South Coast side have scored an impressive 38 goals (third best in the league) with 15 of them coming through their 33-year-old striker.

However, it is obviously Brighton’s defensive solidity that has been the bedrock of their success this season with just 14 goals conceded in 23 matches – the best in the league – whilst they have also kept a clean sheet in more than half of their matches (14).

Furthermore, The Seagulls home form has been absolutely terrific having won their last three at the AMEX Stadium and no home losses since early September.

Cardiff started the season badly and took action very quickly by appointing Championship veteran Neil Warnock – very much the Sam Allardyce or Tony Pulis of the second tier. Since his appointment, performances have improved and the Bluebirds have lifted themselves out of the relegation places and up to 19th – four points clear of the drop-zone. However, they are not having the best of times recently and, despite their reasonably good position, they have claimed maximum points from just one of their last six matches.

Goals are not too much of a problem for the side from the Welsh capital with Warnock’s men having scored 26 overall whilst they have also found the back of the net in all but one of their last eight matches. Unfortunately though, defence has been a real thorn in Cardiff’s side with 38 conceded and just one clean sheet (coincidentally against Brighton) since Warnock took charge.

Going to Brighton is daunting for any side but even more so for Cardiff given their poor form on the road which reads no wins in their last four matches away from the Cardiff City Stadium. Having said that, the fact they have drawn their last two on their travels is perhaps a sign of encouragement.

The reverse fixture finished 0-0 back in early December but, with this game being at the AMEX and Brighton’s excellent form, I can only see one winner here. The bet to go for here is ‘Glenn Murray to Score & Brighton & Hove Albion to Win’ at 13/8. As mentioned on previous Brighton tips, Murray has been exemplary at the AMEX this season and has only failed to find the back of the net in three of Brighton’s 12 home matches. The striker should continue his purple patch against a leaky Cardiff back-line.

Although Cardiff do tend to score in most matches, Brighton and their excellent back-line are a different proposition and it’s hard to envisage The Bluebirds causing The Seagulls too much trouble – particularly in Brighton. With this in mind, ‘Brighton & Hove Albion to Win to Nil’, at a surprisingly good 6/4, is a nice addition.

Visit site
Visit site
Will this bet win?
Voted 0 user
Will pass 50%
Won't pass 50%
Will pass
Won't pass
Don't you agree with the expert?
Suggest your tip
Show the results
Want to get updates on new posts? Follow Thomas Giles